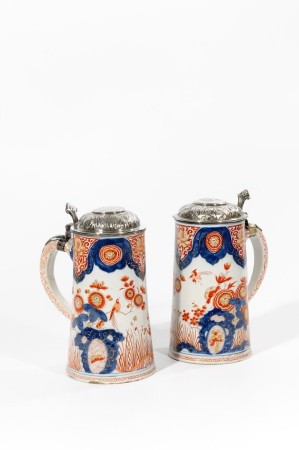 Each of tapering cylindrical shape and painted in iron-red, blue and gold with a bird in flight near another perched on a branch of chrysanthemums amidst pierced rocks, flowering plants and grasses beneath a wide border of three blue-edged iron-red ground floral lappets alternating with gilt trellis-patterned blue-ground lappets centering a mons device, and the ribbed loop handle with a border of iron-red and gilt husks between foliate scrolls on the sides; the silver covers engraved with coats of arms, one with the arms of the city of Leeuwarden, each within a central medallion encircled by a border of repoussé acanthus leaves repeated on the handle mount below the fan-shaped reeded thumbpiece, the interior and the handle mount showing traces of gilding.

In the last quarter of the seventeenth century the Japanese porcelain factories at Arita (Kyushu) developed their own styles for decorating the wares to be exported to the Netherlands. The sought-after blue and white wares no longer imitated precisely the Chinese ‘Kraak’ and Transitional models of the earlier decades of the century, but made way for more typical Japanese motifs, such as continuous landscapes and boldly painted designs of large flowers, phoenixes or other mythological creatures (see Jörg, Van Campen 1997, p. 199). Moreover, polychrome wares in new styles and palettes began to appear on the market: Kakiemon and Imari.

Typical for Imari porcelain, named after its place of distribution near the Arita factories, were its asymmetrical compositions painted in underglaze blue, iron-red and gold. These new wares were an immediate success in the Netherlands where consumers were familiar with only the blue and white porcelains. Although initially quite expensive, Imari porcelain began to be imported in sufficient quantities that it soon dominated the market and created a fashion. In order to participate in the emerging market for the newly sought-after designs, the Delft potters began to produce imitations that were offered for lower prices. On a smaller scale, making them now a great rarity, the Chinese also copied some Japanese Imari designs (primarily the colors and several selected motifs) for their export market before adopting the palette for a large production of ‘Imari’ wares in their own style of decoration, especially popular from about 1725 to 1740 (see Jörg, Van Campen 1997, p. 200; several pieces of Chinese porcelain in this rare Japanese style are in the Palace Museum, Beijing, illustrated in Qing Porcelain from the Palace Museum Collection, Beijing 1989, pp. 129-131, nos. 112-114).

The production of Imari-style decorated earthenwares in Delft began at the turn of the seventeenth to eighteenth century, reaching its zenith in the 1720s and 1730s. The present pair of tankards is a fine example of the combination of a typical European shape with the fashionable exotic designs.

Similar example:
A silver-gilt-mounted tankard of similar form and decoration, including the bird perched on a branch with two chrysanthemum flowers, in the Museum für angewandte Kunst, Vienna, is illustrated in Lunsingh Scheurleer 1984, p. 230, ill. 131.