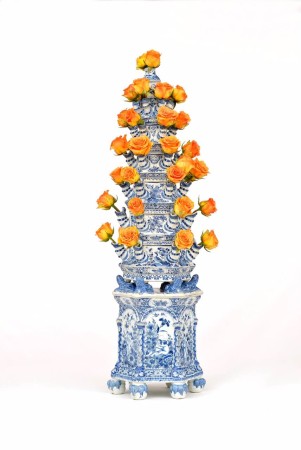 The hexagonal base molded on each side with an architectural arch-shaped slightly recessed panel painted three panels the cherubs seated and embracing beneath columns between bordered with foliage, and the slightly canted upper and lower borders with a blue ground reserved with blossoms, leaves and scrolls, the footrim with a demi-ruyi-head band above six claw-and-ball feet, encircled by six triangular lotus and scroll ornaments in the interstices between six blue-spotted recumbent frogs supporting the six hexagonal tiers above; each tier with six open-mouthed animal heads forming the spouts, their necks encircled with two molded bands of circlets, and painted between each on the lowest tier with a peacock plants, on the third tier with a bird perched on a rock clusters beneath ruyi-head panels, on the second tier ruyi-head devices, and on the top tier with ruyi heads above small oval panels inscribed with pseudo-Chinese characters and the spouts encircling a raised pedestal surmounted by an ovoid vase painted above and below a molded central rib with a bird perched or in flight amidst flowering plants.

Afmetingen
Height: 98 cm. (38 7/16 in.)
Code
D1421
Collectie
Aronson Antiquairs
Copyright beeld
https://creativecommons.org/licenses/by-nd/3.0/deed.en_US
Datering
circa 1690
Materiaal/techniek
tin-glazed earthenware
Merk
Marked with an incised Greek A and number 1 on the interior of the three middle tiers, an incised 8 (B or g) and number 2 in blue on the interior of the bottom tier, number 2 in blue on the interior and exterior of the second tier, and number 2 in blue on the top of the base
Permanente link
https://www.aronson.com/object/1421-blue-and-white-seven-piece-pyramidal-flower-vase/
Plateelbakkerij
De Grieksche A
Productieplaats
Delft
Unieke code
D1421
Deel dit voorwerp Deel dit object op Facebook Deel dit object op Twitter Deel dit object op WhatsApp