Bottle cooler with its pair of flasks 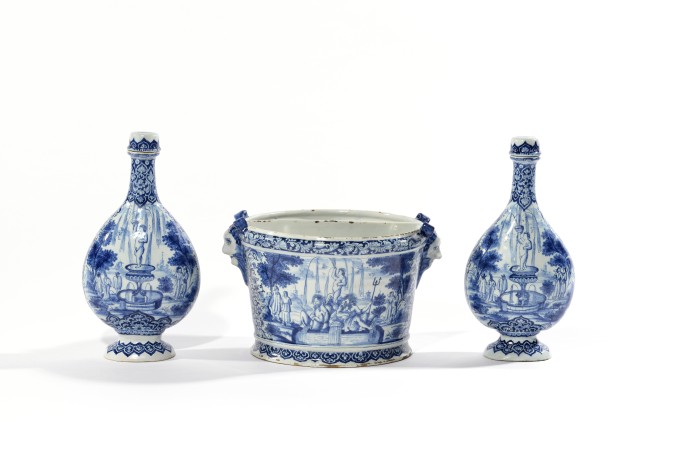 The cooler painted on the front with a fountain formed as cupid holding a cornucopia spouting water and striding on an urn above a circular pool, on either side groups of three figures conversing or strolling beneath trees before rustic buildings on hills, and on the reverse with a fountain formed as a putto with water spouting from his raised right hand and standing above a spouting dolphin between two seated and bearded figures of a river god supporting an overturned urn pouring water, and Neptune holding a trident, on either side pairs of figures conversing beneath trees before distant buildings on hills, the scenes between areas of baroque floral scrollwork on either side interrupted at the top with a bearded satyr’s-head handle further interrupting the blue-ground flowering-vine border around the convex-molded rim, the slightly flaring footrim with a lappet border, and the interior bisected by a vertical dividing wall; each teardrop-shaped flask with a slightly convex front painted with a fountain scene similar to that on the front of the cooler, the flattened back with a fountain formed by a spouting putto standing on a tall rock above two putti frolicking with Cupid between tall trees, the sides and neck with similar baroque scrollwork, and the flaring oval foot with a lappet border repeated around the sides of the circular covers above a dashed band around the rim, their tops each painted with a winged head of Cupid amidst clouds, and the interior threaded to screw onto the flask rims.