Types of ceramic: an overview of earthenware, stoneware and porcelain

Earthenware is a type of ceramic, which is the collective term for all products made of fired clay. The name comes from keramos, the Greek word for potter’s clay. Ceramics can be categorised into earthenware, stoneware and porcelain. The differences between them lie in their composition and the temperature at which they are fired.

The inside of a ceramic is known as the body, and in earthenware it is brittle and porous. The pots are therefore fired at a low temperature, between 800 and 1150 degrees Celsius. Earthenware that is not glazed is known as terracotta (literally, ‘baked earth’). Glazing the surface makes earthenware watertight and gives it an attractive sheen.

Earthenware can be further categorised into lead A transparent glaze whose main component is lead oxide. - or tin-glazed, and creamware A hard type of earthenware with a cream-coloured body covered with a transparent lead glaze. .

Earthenware for domestic use has traditionally been given a transparent lead glaze. Metal oxides can be used to colour the glaze. For example, the addition of copper will turn it green. The pots are fired at approx. 1000-1100 °C and the resulting body may be red, yellow or white, depending on the mixture of clays used in it.

Lead-glazed earthenware can be decorated in a variety of ways. Engobe or slip decoration is common. This technique involves applying a layer of liquid clay slip of a colour different from the body to all or part of the surface of the unfired object. Motifs can be applied by trailing the slip onto the object from a spouted can.

Alternatively, sgraffito decoration can be scratched or incised through the dried-out layer of slip, a marbled effect can be created by mingling slips of different colours, or relief decoration can be applied using stamps or moulds. In Friesland, a method of slip carving called kerfsneetechniek was extremely popular.

Tin glazes are white and opaque. Earthenware that has been fired once (biscuit) is dipped in a tub of tin glaze to produce a white ground to which painted decoration can be applied. The paintwork can be done either freehand or with the use of a pounce. To enhance the colour and surface shine, the object is then coated with transparent lead glaze before being fired again.

Maiolica (with an i) is a type of Spanish and Italian tin-glazed earthenware made from around 1250 onwards. It is tin-glazed on both the front and the back and the painted decoration is executed in blue, yellow, green, manganese purple and rusty red. A particularly noteworthy feature is the use of lustre – a glaze with a metallic sheen – on some pieces.

Majolica (with a j) is a type of cheap tin-glazed earthenware produced in the Low Countries. The fronts of the pieces are tin-glazed and the backs lead-glazed. The use of triangular spacers called spurs to separate the pieces in the kiln left distinctive scars on the front of the dishes.

After Antwerp was surrendered to the Spanish in 1585, many majolica makers moved to the Northern Low Countries. The colourful wares they produced included porringers, dishes, apothecary jars and syrup jars. The Dutch majolica industry faced fierce competition from the mass imports of Chinese porcelain from 1600 onwards and from the development of Delftware. Even so, majolica continued to be produced until well into the nineteenth century.

Dutch majolica makers introduced technical innovations that enabled them to produce a more refined form of tin-glazed earthenware. Since the town of Delft became the main centre for its production, this type of ceramic is now known as ‘Delftware’ or ‘Delft faience’. The objects have thin bodies and are tin-glazed both back and front. It is fired at high temperatures using the grand feu technique (at approx. 1000° C), whereas the petit feu technique (approx. 600° C) was used for colours liable to burn away easily, like red and gold. Faience was fired in saggars, supported on pegs. which left marks mainly on the back of the objects.

Stoneware has a hard, non-porous body and is fired at 1150-1300° C. In the past, it was used mainly for jugs and drinking vessels and for storing foodstuffs. Although it is already watertight, it is often given a salt glaze. This is done by throwing common salt (sodium chloride) into the kiln during the initial firing. The salt vaporises and fuses with the clay body. The colour of the resulting pot is determined by the amount of iron in the clay. If there is a large amount, the body will turn brown; if not, it will be white or grey.

Stoneware began to develop in Europe in the thirteenth century. There were soon countless production centres in the German Rhineland, within the Cologne-Koblenz-Aachen triangle. Their products were typically decorated with armorial or portrait medallions and vertical bands depicting biblical or historical scenes.

Setting the 17th and 18th-century table

The city of Delft in the seventeenth and eighteenth centuries 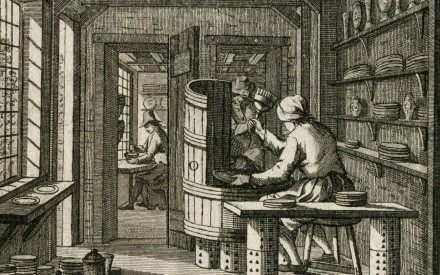