It is not surprising that Dutch delftware is sometimes confused with porcelain, as the potters of Delft copied both the form and decoration of the popular porcelain objects imported from China.

To achieve the quality of Chinese porcelain the makers of ‘Delft porceleyn' strove to make a product with thin walls, a smooth white ground and a glossy finish. The thin, almost translucent material and shining white surface of Asian porcelain Type of ceramic with a hard, non-porous body created by firing at a temperature of 1300-1500 ºC. made it an immediate hit in Europe. Soon after it was first imported by the Dutch East India Company (VOC) potters in Dutch towns tried to copy the attractive exotic objects.

The breakthrough came in the use of tin glaze, a technique that had been brought to Holland by immigrants. Adding marl Adding earth from Tournai (known in Dutch as Doornikse aarde) to clay produced a pale yellow body. to the clay mixture used to make the pots made the clay less fatty, which meant the potters could create more delicate shapes that looked more like porcelain. These objects were not made of porcelain, but of a clay that became yellowish or light red when fired. This can be seen where the glaze flakes off.

Dipping the pots meant that they were completely covered in tin glaze, rather than just on one side like before. And so Delft potters succeeded in producing high-quality faience that looked like porcelain.

It is commonly thought that Dutch delftware comes only in blue and white, like Chinese porcelain. But from 1680 onwards it was also decorated using other colours. In the 18th century this evolved into a wide range of colours, including red, yellow and gold. One particularly interesting group of Dutch delftware had a black ground instead of white, designed to imitated oriental lacquer ware and porcelain.

Delft faience could be decorated in all manner of colours

Dutch delftware was decorated with both eastern and western motifs. Oriental motifs on Kraak ware, named after the Portuguese ships that first brought it to Europe, provided the first source of inspiration. But potters in Delft were particularly adept at combining oriental motifs with western stylistic elements. This lead to a new European fashion known as Chinoiserie.

The shapes of the pots were also a combination of east and west. People loved the exotic forms of Chinese porcelain, and so things like the gourd-shaped bottle or kendi Jug with a round body. The neck or spout sits on the rounded shoulder. Some are in the shape of animals (including elephants, ducks and fish). Kendi were used throughout Southeast Asia and the Middle East. A porcelain version of this form was introduced to the Netherlands in the early 17th century. were copied. But there was also demand for western figurines: dogs and cows for example.

The Delft 'porceleynbakkers' therefore produced a very diverse range of products. Besides the surviving objects, price lists in archives and the inventories of potteries give an impression of what was produced in Delft over the centuries. This ranged from dishes and bowls to klapmutsen (bowls with everted rims), rolwagens (cylindrical ‘rouleau’ vases), kwispedoors (spittoons), casbacken (bowls made to display on the tops of cabinets) and tobacco jars.

The everyday and the ornamental

All these objects fall into one of three categories: everyday utility wares, decorative household items and purely ornamental objects.

Everyday wares were also known as ‘gemeen’ (‘common’) or ‘slegt’ (poor-quality) wares and they were either plain white or had simple decoration. They were used mainly in the kitchen, and included items like plates, bowls, strainers and mustard pots.

As a culture of tea and coffee drinking emerged, so did the demand for tea and coffee sets. But other luxury items like terrines, candlesticks, cruet sets, salt pots and shakers also became popular. This was decorative ware, which often had more refined decoration.

Purely ornamental items, referred to as ‘best’, were used to demonstrate one’s status and adorn the interior of one’s home. Dishes, vases and jars were arranged on ledges around the walls of rooms, on cabinets and mantelpieces and over doors. From the 18th century they included figurines or animals, like the famous Delft cows. Potteries supplied their wares in different versions: with a plain or ribbed surface, with or without loop handles or lids, and in different sizes. One cupboard set might be sold in as many as ten different versions. 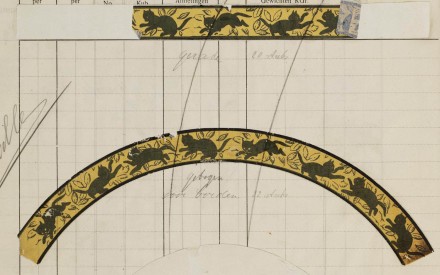 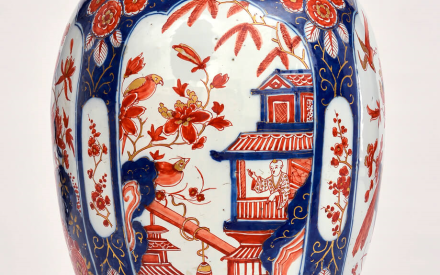 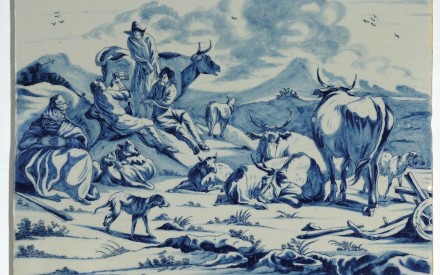 Porcelain paintings: Delft plaques in all shapes and sizes