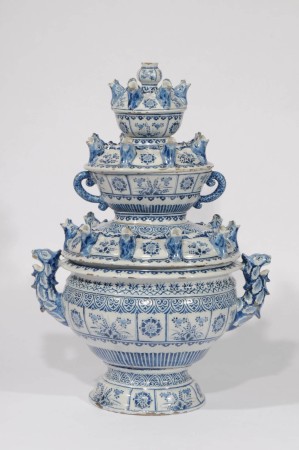 Comprising three tiers in five pieces: the upper section a bowl with an integral cover surmounted by a spherical spout painted with two rosettes and two quatrefoil blossoms and foliage above a border of trefoils, the rim of the cover with rosettes and floral sprigs alternating with six spouts formed as open-mouthed stag’s heads, and the same rosettes alternating with panels of flowering shrubbery within four panels on the bowl between trefoil borders on its rim and foot; the central section similarly decorated and bordered, but the cover with eight stag’s head spouts surrounding a central oval depression painted with a flowering rose branch, and the bowl with dotted blue S-scroll handles at the ends interrupting a painted border of fluting around the lower body; and the massive lower section: its ogee-shaped foot and its cover also painted with rosettes and flowering shrubbery alternating on the cover with ten stag’s head spouts, the depressed center painted with an insect hovering and a bird perched on a flowering rose branch and surrounded by an anthemion and bellflower border repeated around the upper body and ankle of the compressed pear-shaped bowl below and in the center of the interior around an oval floral medallion, the interior of the neck with a border of stylized acanthus and bellflowers, the neck on the exterior with a border of scroll motifs beneath an everted rim bordered with flowerheads and beads and affixed at the ends with handles formed as open-mouthed beasts decorated with leaves and interrupting a painted border of fluting around the lower body.

Afmetingen
Height: 73.7 cm. (29 in.)
Width: 53 cm. (20.9 in.)
Code
D9010
Collectie
Aronson Antiquairs
Copyright beeld
https://creativecommons.org/licenses/by-nd/3.0/deed.en_US
Datering
circa 1686-1695
Herkomst
Almost certainly acquired by Lady Mary Mordaunt (1658/9-1705), Duchess of Norfolk and 7th Baroness Mordaunt, and her second husband Sir John Germain(e), 1st Baronet (1650-1718), for the King’s Dining Room,
Drayton House, Lowick, Kettering, Northamptonshire;
to his appointed heir: Lord George Germain(e), 1st Viscount Sackville and Baron Bolebrook (1716-1785), to his son: Charles Sackville-Germain(e), 2nd Viscount Sackville of Drayton and 2nd Baron Bolebrooke, (1768-1843) who succeeded in 1815 as 5th Duke of Dorset and died unmarried, to his niece and sole heir: Caroline Sackville, who in 1837 married George Stopford, and they took on the name Stopford-Sackville;
By Descent at Drayton House in the Stopford Sackville family (who are still the owners of the house); Duncan H. McLaren Ltd., London, May 13, 1991; The collection of Simon Sainsbury, Woolbeding House, Sussex
Literatuur